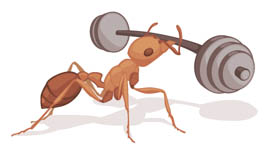 How the Meek Shall Inherit The Data Center, Change The Way We Build and Deploy Applications, And Kill the Public Cloud Virtualization Market

The tiny ant. Capable of lifting up to 50 times its body weight, an ant is an amazing workhorse with by far the highest “power to weight” ratio of any living creature. Ants are also among the most populous creatures on the planet. They do the most work as well – a bit at a time Ants can move mountains.

Atom chips (and ARM chips too) are the new ants of the data center. They are what power our smartphones, tablets and ever more consumer electronics devices. They are now very fast, but surprisingly thrifty with energy – giving them the highest computing power to energy weight ratio of any microprocessor.

I predict that significantly more than half of new data center compute capacity deployed in 2016 and beyond will be based on Atoms, ARMs and other ultra-low-power processors. These mighty mites will change much about how application architectures will evolve too. Lastly, I seriously believe that the small, low-power server model will eliminate the use of virtualization in a majority of public cloud capacity by 2018. The impact in the enterprise will be initially less significant, and will take longer to play out, but in the end it will be the same result.

So, let’s take a look at this in more detail to see if you agree.

This week I had the great pleasure to spend an hour with Andrew Feldman, CEO and founder of SeaMicro, Inc., one of the emerging leaders in the nascent low-power server market. SeaMicro has had quite a great run of publicity lately, appearing twice in the Wall Street Journal related to their recent launch of their second-generation product – the SM10000-64 based on a new dual-core 1.66 GHz 64-bit Atom chip created by Intel specifically for SeaMicro.

Note – the rest of this article is based on SeaMicro and their Atom-based servers.  Calxeda is another company in this space, but uses ARM chips instead.

These little beasties, taking up a mere 10 rack units of space (out of 42 in a typical rack), pack an astonishing 256 individual servers (512 cores), 64 SATA or SSD drives, up to 160GB of external network connectivity (16 x 10GigE), and 1.024 TB of DRAM. Further, SeaMicro uses ¼ of the power, ¼ the space and costs a fraction of a similar amount of capacity in a traditional 1U configuration. Internally, the 256 servers are connected by a 1.28 Tbps “3D torus” fabric modeled on the IBM Blue Gene/L supercomputer.

The approach to using low-power processors in a data center environment is detailed in a paper by a group of researchers out of Carnegie Mellon University. In this paper they show that cluster computing using a FAWN (“Fast Array of Wimpy Nodes”) approach, overall, are “substantially more energy efficient than conventional high-performance CPUs” at the same level of performance.

The Meek Shall Inherit The Earth 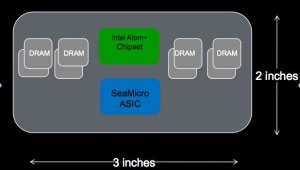 Now, let’s briefly consider the power issue. SeaMicro saves power through a couple of key innovations. First, they’re using these low power chips. But CPU power is typically only 1/3 of the load in a traditional server. To get real savings, they had to build custom ASICs and FPGAs to get 90% of the components off of a typical motherboard (which is now the size of a credit card, with 4 of them on each “blade”). Aside from capacitors, each motherboard has only three types of components – the Atom CPU, DRAM, and the SeaMicro ASIC. The result is 75% less power per server. Google has stated that, even at their scale, the cost of electricity to run servers exceeds the cost to buy them. Power and space consumes >75% of data center operating expense. If you save 75% of the cost of electricity and space, these servers pay for themselves – quickly.

If someone just gave you 256 1U traditional servers to run – for free – it would be far more expensive than purchasing and operating the SeaMicro servers.

Why would anybody buy traditional Xeon-based servers for web farms ever again? As the saying goes, you’d have to pay me to take a standard server now.

This is why I predict that, subject to supply chain capacity, more than 50% of new data center servers will be based on this model in the next 4-5 years.

So let’s dig a bit deeper into the specifics of these 256 servers and how they might impact application architectures. Each has a dual-core 1.66GHz 64-bit Intel Atom N570 processor with 4GB of DRAM. These are just about ideal Web servers and, according to Intel, the highest performance per watt of any Internet workload processer they’ve every built.

They’re really ideal “everyday” servers that can run a huge range of computing tasks. You wouldn’t run HPC workloads on these devices – such as CAD/CAM, simulations, etc. – or a scale-up database like Oracle RAC. My experience is that 4GB is actually a fairly typical VM size in an enterprise environment, so it seems like a pretty good all-purpose machine that can run the vast majority of traditional workloads.

They’d even be ideal as VDI (virtual desktop servers) where literally every running Windows desktop would get their own dedicated server. Cool!

Forrester’s James Staten, in a keynote address at CloudConnect 2011, recommended that people write applications that use many small instances when needed vs. fewer larger instances, and aggressively scale down (e.g. turn off) their instances when demand drops. That’s the best way to optimize economics in metered on-demand cloud business models.

So, with a little thought there’s really no need for most applications to require instances that are larger than 4GB of RAM and 1.66GHz of compute. You just need to build for that.

And databases are going this way too. New and future “scale out” database technologies such as ScaleBase, Akiban, Xeround, dbShards, TransLattice, and (at some future point) NimbusDB can actually run quite well in a SeaMicro configuration, just creating more instances as needed to meet workload demand. The SeaMicro model will accelerate demand for scale-out database technologies in all settings – including the enterprise.

In fact, some enterprises are already buying SeaMicro units for use with Hadoop MapReduce environments. Your own massively scalable distributed analytics farm can be a very compelling first use case.

This model heavily favors Linux due to the far smaller OS memory footprint as compared with Windows Server. Microsoft will have to put Windows Server on a diet to support this model of data center or risk a really bad TCO equation. SeaMicro is adding Windows certification soon, but I’m not sure how popular that will be.

If I’m right, then it would seem that application architectures will indeed be impacted by this – though in the scheme of things it’s probably pretty minor and in line with current trends in cloud.

SeaMicro claims that they can support running virtualization hosts on their servers, but for the life of me I don’t know why you’d want to in most cases.

What do you normally use virtualization for? Typically it’s to take big honking servers and chunk them up into smaller “virtual” servers that match application workload requirements. For that you pay a performance and license penalty. Sure, there are some other capabilities that you get with virtualization solutions, but these can be accomplished in other ways.

With small servers being the standard model going forward, most workloads won’t need to be virtualized.

And consider the tenancy issue. Your 4GB 1.66GHz instance can now run on its own physical server. Nobody else will be on your server impacting your workload or doing nefarious things. All of the security and performance concerns over multi-tenancy go away. With a 1.28 Tbps connectivity fabric, it’s unlikely that you’ll feel their impact at the network layer as well. SeaMicro claims 12x available bandwidth per unit of compute than traditional servers. Faster, more secure, what’s not to love?

And then there’s the cost of virtualization licenses. According to a now-missing blog post on the Virtualization for Services Providers blog (thank you Google) written by a current employee of the VCE Company, the service provider (VSPP) cost for VMware Standard is $5/GB per month. On a 4GB VM, that’s $240 per year – or 150% the cost of the SeaMicro node over three years! (VMware Premier is $15/GB, but in fairness you do get a lot of incremental functionality in that version). And for all that you get a decrease in performance having the hypervisor between you and the bare metal server.

Undoubtedly, Citrix (XenServer), RedHat (KVM), Microsoft (Hyper-V) and VMware will find ways to add value to the SeaMicro equation, but I suspect that many new approaches may emerge that make public clouds without the need for hypervisors a reality. As Feldman put it, SeaMicro represents a potential shift away from virtualization towards the old model of “physicalization” of infrastructure.

The SeaMicro approach represents the first truly new approach to data center architectures since the introduction of blades over a decade ago. You could argue – and I believe you’d be right – that low-power super-dense server clusters are a far more significant and disruptive innovation than blades ever were.

Because of the enormous decrease in TCO represented by this model, as much as 80% or more overall, it’s fairly safe to say that any prior predictions of future aggregate data center compute capacity are probably too low by a very wide margin. Perhaps even by an order of magnitude or more, depending on the price-elasticity of demand in this market.

Whew! This is some seriously good sh%t.

It’s the dawn of a new era in the data center, where the ants will reign supreme and will carry on their backs an unimaginably larger cloud than we had ever anticipated. Combined with hyper-efficient cloud operating models, information technology is about to experience a capacity and value-enablement explosion of Cambrian proportions.

What should you do? Embrace the ants as soon as possible, or face the inevitable Darwinian outcome.

The ants go marching one by one, hurrah, hurrah…

15 thoughts on “SeaMicro: Atom and the Ants”