A couple months back I had a chance to catch up with Pat O’Day, CTO at BlueLock. They are a cloud provider headquartered in Indianapolis with two data centers (a primary and a backup), and also cloud capabilities on Wall Street and in Hong Kong for specific customers.

BlueLock has been a vCloud service provider for the past year and has taken an enterprise IT-centric approach to their cloud services. They are not going after the SMB web hosting market, and don’t want to sell to everybody. Their primary focus is on mid-tier enterprises looking for a provider that will deliver cloud in a way that integrates with customer environments – what you might expect from a managed services provider.

Initially they just provided private clouds, really just dedicated VMware environments with a vCenter front end. Their clouds now are still mostly private, with the user able to control what level of multi-tenancy they want. They do this through three models: 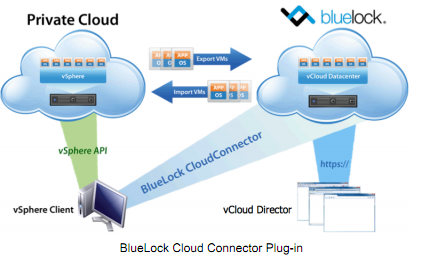 For multi-tenant users they implemented vCloud Director as the UI. When showing this to their customers, they got feedback that Director was too unfamiliar when compared to vCenter. This gave them the idea to create a plug-in to vCenter that would allow VMware administrators to control their cloud resources.

Their plug-in was enabled by the fact that vCloud Director provides a full implementation of the vCloud API. This model has proven to be very popular with their customers. It was also very innovative. 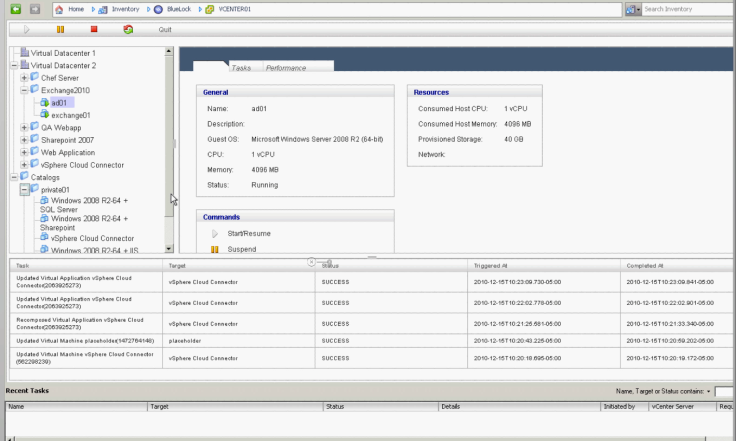 In addition to starting and stopping cloud instances, users can move applications to BlueLock’s cloud and back again. As O’Day explained it, a vCenter administrator can create vApps from workloads running in their data center and use vCenter to deploy it up to the cloud – and to repatriate it again if necessary.

Contrast this with most cloud providers. Some, like Amazon and Rackspace, require you to package up your applications and move them to the cloud with a lot of manual processing. Amazon now can import VMDKs, but that only gets you instances – not whole apps. Other service providers, including most who target the enterprise, have “workload onboarding” processes that generally require IT to package up their VMware images and let the provider manage the import. Sometimes this is free, sometimes there may be an onboarding charge. BlueLock’s approach makes it easy and under the control of IT for workloads and data to be migrated in both directions.

VMware recently announced vCloud Connector to perform essentially the same function. But to my knowledge BlueLock remains one the few – if not the only- production cloud with this type of capability deployed.

While we all love to cite Amazon’s velocity of innovation, BlueLock has shown that even smaller providers can deliver very innovative solutions based on listening closely to customer requirements. While most people out there today are just talking about hybrid clouds, BlueLock is delivering.